It's been way too long since I've posted an update! I've only taken a few months away, but SO MUCH has happened during that time! Hopefully I can remember it all for this post, otherwise I guess I'll be posting again very soon :)

First, I had a baby! Yay!!!! My husband and I welcomed a beautiful baby girl into the world at the end of May, and we are thrilled to report that both Baby and I have recovered very well. We are so in love with our newest family member and are adjusting well to being a family of five. God is so good!

Second, remember when I announced that Common was named a finalist in the 2019 Excellence in Editing Awards? Well...WE WON!!!! EEEEEEEEEEK! So many people were involved in the production of the beautiful book I get to put my name on, and I'm so very grateful to each and every one - including all the readers who hold Leah and Rafe dear to their hearts :) A huge thanks and congratulations to Michele Israel Harper, my fabulous editor! She gets at least as much credit as I do for polishing Common into its shiny published form. It's thrilling and a little daunting to now officially call myself an award-winning author! 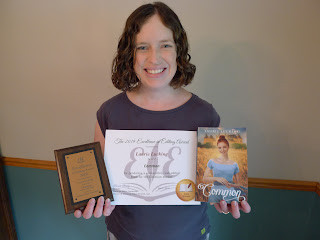 Third - speaking of awards, Common is also a finalist in the ACFW Carol Awards!!!! EEEEEEEEEK again! I most definitely cried in the grocery store when I got the call, then again when I saw the video announcing the finalists. My book is being listed among the very best in the industry, and I am in absolute awe. This is an award I've been hearing about ever since I joined ACFW (American Christian Fiction Writers), and it is an absolute dream come true to have my book in the running for such an honor. So much squealing and happy dancing over here!!

Most recently, despite the added challenges of having a new baby at home, I'm registered for the ACFW conference this September!! I've always hoped to attend the ACFW national conference at least once, and ever since I received the news about the Carol Awards, I've been trying to figure out a way to make it happen. Now that I'm officially going, I'm a bundle of nerves and excitement and so many other emotions. San Antonio, here I come! You know, in a few months... :)

Thanks for bearing with me through all the updates, friends! Stay tuned for more updates coming soon! (I'll try to stay more on top of things so future updates aren't quite so long!)
Posted by Laurie Lucking at 7/25/2019